This year my trip to IPExpo started with a bloggers Q&A surrounding Microsoft Azure and the cloud, myself and a number of other bloggers were joined by Zane Adams general manager Microsoft Azure. I intend on doing a seperate blog post on the conent of this session, but from my point of view it was good to hear Microsoft’s vision.

After the bloggers event, @ChrisDearden lead the way to IPExpo. This was my second visit to IPExpo, I really enjoyed last year as I made lots of contacts and saw lots of interesting technology. This year for me it was about meeting up with people from the community and industry, making new contacts and identifying new technologies. As I was unable to attend VMworld that made this event more important for me.

Day 1 for me was about finding out about some key vendors I had identified previously, on the top of my list was RES Software and Vertensys. RES Software produces a dynamic desktop solution to assist with profile management, personalisation, printer management, virtual desktop management, it works across physical and virtual desktops. It was good to chat with the guys from RES and understand how this will fit in with VDI solutions and help move away from problematic roaming profiles. I’m looking forward to getting some hands on time with their software soon.

Vertensys offer a virtual IO solution similar in principle to Xsigo but it works by extending the standard PCIe bus from the servers. Why Vertensys was of particular interest to me is due to the better suitability to small infrastructures compared to Xsigo.

At the end of the hall was SGI’s modular data centre, it was a large 40ft trailer container, designed to be wheeled into a large warehouse, power, network and water connected and your ready to go. These kind of containers are heart of the cloud and demonstrate how modular datacenter can work on a huge scale.

In the afternoon I joined Simon Seagrave’s (www.techhead.co.uk) session titled “Building a successful virtualization lab environment” as always it’s good to hear idea’s surrounding lab setups and for me the demonstration of the EMC Uber VSA was fantastic. I had been aware of the Uber VSA but hadn’t had the chance to have a play with it yet! To find out about the Uber VSA visit the blog of Nicholas Weaver a EMC vSpecialist http://nickapedia.com

The last stop of the day before the vBeers was the Veeam stand, today was release day for Veeam Backup and Replication 5, I joined the Veeam team and some of the UK bloggers to celebrate with Veeam, in true Veeam fashion it was with shots of Vodka!

Wednesday evening was spent at the vBeers organised by Jane Rimmer (Thanks Jane!) it was good to have a natter with some of the vendors and fellow bloggers. After vBeers it was of to my hotel that was handily near by!

My plan for the Thursday was to catch up with some people I missed on Wednesday, sit in on as many sessions as possible and discover some new technology.

My first stop of the day was the Xsigo stand where I caught up with Nick from Xsigo (@NDyerATXsigo) it was good to see the Xsigo IO virtualisation product in the flesh and have a good chat with Nick. 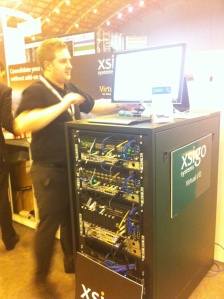 I was particularly impressed with the iPad app that could be used to manage all your virtual IO eviroment.

I attended a number of sessions on VDI, most were the same old marketing message, a few had useful insights into virtualisation projects. It was interesting to hear about DoubleTakes product that works by booting the desktops from PXE then streams the desktop to the end devices. http://www.doubletake.com/english/products/double-take-flex/Pages/default.aspx 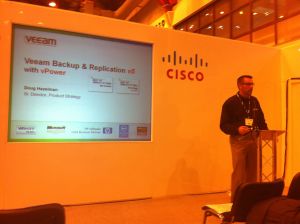 The highlight of my day was meeting up with Simon Seagrave and having a walkthrough of the vBlock platform, a union of Cisco, EMC and VMware. I have heard lots about it previously but there is nothing like seeing it in flesh. As always it was great to talk all kinds of tech with Simon, typically we ended up talking about our iPad’s!

The most surprising tech of the show was the Fusion-IO’s products, it wasn’t a company I had heard of before. Fusion IO is a solid state storage product but isn’t an SSD. One fusion IO card in a server can power 100 VDI sessions, on the stand they had 1 ESX server with a Fusion IO card on board and from that they were able to power all the VDI sessions shown in the center of the video wall and all the videos shown below and above!

I’m looking forward to learning more about Fusion IO and hopefully getting to test it in a VDI enviorment! If someone from fusion is listening I would love to trial a card! 😉 for more information take a look at there website http://www.fusionio.com

So that was my IPExpo 2010 experience, all in all I had a fantastic time, great people and fantastic tech. I am looking forward to next year!